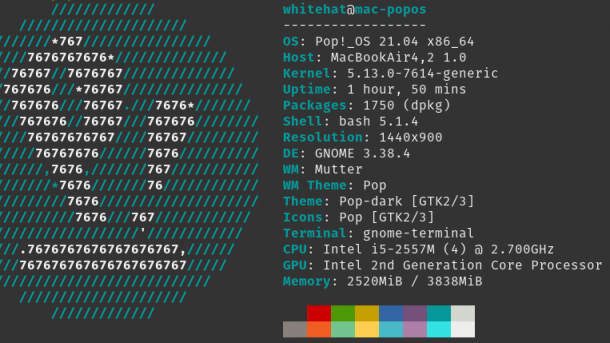 TL;DR: Use Pop!_OS or Elementary OS.

I have admired Apple hardware for quite some time now. It is usually well-made, elegant, and holds up when other laptops do not. I’m looking at you HP, Acer, and Dell. I have an older MacBook Air from 2011, which is the second MacBook I ever purchased, sitting on my desk. As one might imagine, it has not been able to receive updates from Apple for quite some time now and I have been thinking of how to keep using it securely. I could technically use it with the last supported macOS edition, which I believe is High Sierra, but that would eventually contain vulnerabilities that would never be patched. So, this is where I decided to turn to the Linux community.

I have been a casual user of Linux for a number of years now. I have even produced some Linux-based content for the Back From the Future Show podcast we ran in 2020, teaching our listeners how to better use the command line interface. I have used Ubuntu, Elementary OS, Manjaro, Linux Mint, Pop!_OS, Parrot OS, Kali Linux, and even Arch on occasion in virtual machine environments. I can officially say, “by the way, I use Arch.” But, the one place I never had a thought to use any flavor of Linux was on my old MacBook Air.

I have been trying to find a friendly, easy-to-use distribution of Linux that supported my older MacBook Air hardware fresh out of the install process. One would think 10 years would be long enough for Mac hardware support to be baked right into every distribution on the market, but one would be sadly mistaken. I tried installing many of my previous favorite distributions on my old MacBook Air, only to find disappointment. Let’s discuss.

First, I tried Elementary OS. I was initially delighted at the hardware support. All of the soft buttons on the functions keys worked as expected: the screen brightness keys, keyboard brightness key, and sound keys worked flawlessly. The MacBook Air trackpad gestures were all supported and customizable in settings. I thought to myself, “I got lucky on the first try!” But that’s about the time things started to fall apart for my experience. First, I noticed that the battery indicator would not show a full charge for the battery, although the laptop had charged overnight and stayed plugged in. Then, I started to see how limited the settings were overall, which could have been a limitation of the desktop environment, but it was also not something I wanted to have to work too hard to change. Lastly, everything seemed a little fuzzy. It was not something I could find a way to resolve. That is when I decided to try something new.

The next few distributions we can pass over rather quickly, because there were major hurdles with a number of them I was not willing to fight to overcome.

Finally, after watching a few videos on this newer Ubuntu-based distribution, I installed Pop!_OS. The install went smoothly and it booted right into the OS quickly, which came as a surprise after my lackluster experience with Ubuntu earlier in the month. I will just touch on what makes me believe I will be sticking with Pop!_OS.

To answer the question that I could not find an adequate answer online for a month ago, “What is the best modern Linux distribution to use on an older MacBook (Air),” the answer is Pop!_OS or Elementary OS.

My Pop!_OS experience has been so pleasant, I have written this entire article on my old MacBook Air from 2011 running Pop!_OS. It has not started to overheat (as it did with some other distributions) and the battery indicator shows a full charge. (Yes, I have changed the thermal paste twice in the last few years, for those that may be sensitive to the heating issues.)